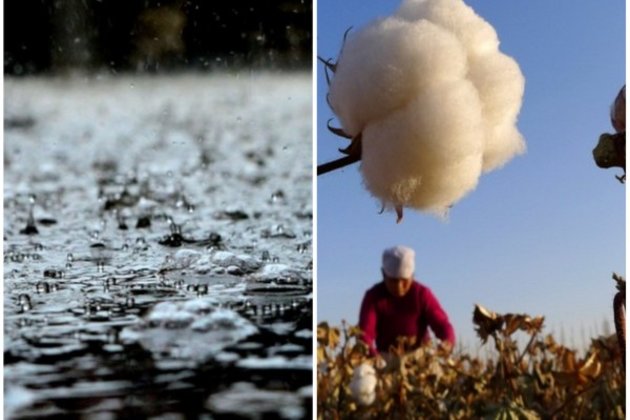 Sindh [Pakistan], August 4 (ANI): Following torrential rains, southern Pakistan has been hit by heavy floods damaging cotton crops which has turned the lives of farmers in Sindh upside down as the rains destroyed thousands of acres of agricultural land and orchards.

"My crop is almost totally destroyed, all six acres of it. There is no hope left, because even now the fields are covered in four feet of water," said Pakistani farmer Sajid Ali from Masoo Burburi, a tiny village in the province of Sindh, Geo News reported.

Due to unusually heavy monsoon rains, numerous people have been killed and hundreds of homes have been washed away.

Moreover, Ali's village which once housed 60 families engaged in agricultural work, planting cotton, wheat and chillies is now one of the worst hit.

As per Geo News, around 50 villages in Sindh were inundated, reported local media, after flash floods from the neighbouring province of Balochistan flowed over, destroying thousands of acres of agricultural land and orchards.

The region has been suffering from drought for decades but now the monsoon rains have put farmers like Ali at a loss as to what to do.

"I had taken out a loan for sowing this crop. But now I have to go and work on someone else's land because we can't make ends meet on what is left of the crop," Ali said.

According to Ali, his crop was worth around USD 7,500, over four times Pakistan's current per capita income of USD 1,666, according to the country's statistics bureau.

As many as 30 villages were submerged in Sindh province in Pakistan after flash floods from Balochistan entered the province, taking the total number of drowned villages in the hilly region to 50.

Meanwhile, the road link between Balochistan with Sindh was completely cut off after a bridge and a road connecting the two provinces were damaged in Lasbela and Khuzdar, respectively.

Traffic on the Quetta-Karachi highway was still suspended due to collapse of major bridges and the sweeping away of big portions of the highway. (ANI)