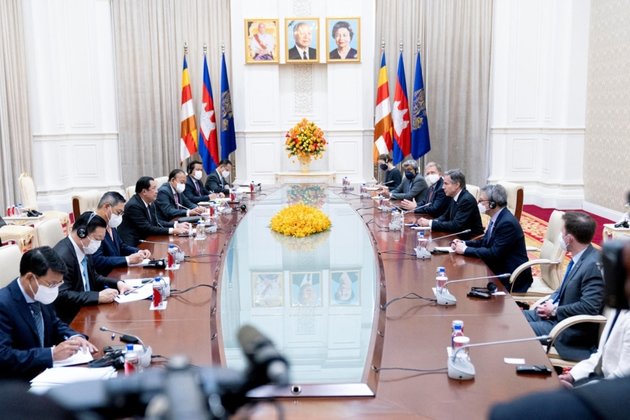 ASEAN Leaders Expected to Focus on Ukraine During Cambodia Gathering

PHNOM PENH, Cambodia - Foreign ministers from ASEAN's member states and its dialogue partners are arriving in Phnom Penh for a summit likely to focus largely on regional and global crises, including the murderous military regime in Myanmar, Russia's unprovoked war on Ukraine and climate change.

Ukraine is expected to draw the spotlight given the planned presence of the Russian Foreign Minister Sergey Lavrov and U.S. Secretary of State Antony Blinken at the series of meetings, which run from July 29 to August 5.

Chheang Vannarith, president of the Asian Vision Institute in Phnom Penh, noted that differing alliances within ASEAN had prevented joint statements from being issued in Russia's war at recent summits. 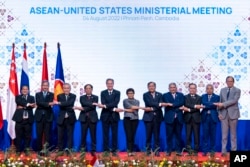 Officials do the 'ASEAN-way handshake' for a group photo at the Sokha Hotel in Phnom Penh, Cambodia, Aug. 4, 2022.

Cambodia, as the rotating chair of ASEAN, is tasked with promoting regional and international cooperation on a range of issues, from revitalizing economic activity after the COVID-19 crisis, to ensuring food security, which has also been threatened by Russia's blockade of Ukraine's major ports, and efforts to limit carbon emissions and advance energy security.

Among the key initiatives to bolster regional economic growth is the Regional Comprehensive Economic Partnership (RCEP), which came into force at the start of this year after a decade of negotiations, noted Chheang Vannarith. Besides the ASEAN countries, RCEP, the world's largest trade pact includes China, Japan, South Korea, Australia and New Zealand.

Blinken is scheduled to meet with Cambodian Prime Minister Hun Sen while in Phnom Penh from August 3 to 5, and then will travel to the Philippines to meet with new President Ferdinand Marcos Jr. before beginning a tour of Africa. Members of the media watch as U.S. Secretary of State Antony Blinken speaks during a U.S. ministerial meeting at the Sokha Hotel in Phnom Penh, Cambodia, Aug. 4, 2022.

The State Department said Blinken will focus on the need for 'ASEAN centrality,' and 'will also address the COVID-19 pandemic, economic cooperation, the fight against climate change, the crisis in Burma [also known as Myanmar], and Russia's war in Ukraine.'

Political scientist Em Sovannara in Phnom Penh told VOA Khmer that the crisis in Burma, which began with the military coup in February 2021, could remain a hot topic among the foreign ministers. The regime made global headlines and U.S. condemnation last week when it executed four pro-democracy activists, including a former lawmaker. Myanmar will not attend.

US: 'All Options on Table' to Punish Myanmar Junta Over Executions

Chum Sounry, spokesman for Cambodia's Ministry of Foreign Affairs and International Cooperation, told VOA Khmer on July 29 that 'up to now, we have received only confirmation that no non-political representative from Myanmar to attend the 55th AMM (ASEAN Foreign Ministers' Meeting) and related meetings.' 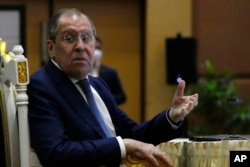 He added that other issues, such as China's occupation of islands in the South China Sea, a central issue at past summits, will not be discussed in depth, despite China's territorial claims overlapping with those of other ASEAN member states including Vietnam, the Philippines, Brunei and Indonesia.

However, Pou Sothirak, executive director of the Cambodian Institute for Cooperation and Peace, believes that the Philippines is likely to raise the South China Sea issue as its new president, Ferdinand 'Bongbong' Romualdez Marcos Jr., asserts his administration.

As for the crisis in Burma, Pou Sothirak said it was time for ASEAN to either find a solution to the situation or send it to the United Nations and admit it can't be resolved at the regional level.

'I think there should be a summit at the United Nations, which means internationalize the crisis, make it an international issue,' said Pou Sothirak, adding that junta leader General Min Aung Hlaing, 'seems to ignore, he is very defiant, and he is mocking' other countries.

The other 10 ASEAN member states agreed on a five-point consensus to end hostilities in Myanmar last year, but there are few signs that the military-led regime is abiding by the plan, which includes an end of violence and initiating dialogue.

Pou Sothirak said Cambodia should also be prepared to respond to unforeseen problems, including U.S. House Speaker Nancy Pelosi's visit of to Taiwan, which has drawn warnings from Beijing that it will damage U.S.-China relations and escalate regional tensions.

He added that the attendance of Blinken and Lavrov at the Phnom Penh gathering could also prove to be a logistical challenge.

'Are they sitting at the same table?' Pou Sothirak said. 'For this case, what position would Cambodia and the entire ASEAN take? This is another sensitive issue that I think will happen during meetings for the next few days.'

Blinken's itinerary, released over the weekend, did not include bilateral meetings with Wang Yi or Lavrov. VOA Khmer has asked the State Department about other potential bilateral meetings but received no response as of Tuesday. Cambodian Foreign Ministry spokesman Chum Sounry could not confirm whether there could be bilateral talks between Blinken and other delegates.