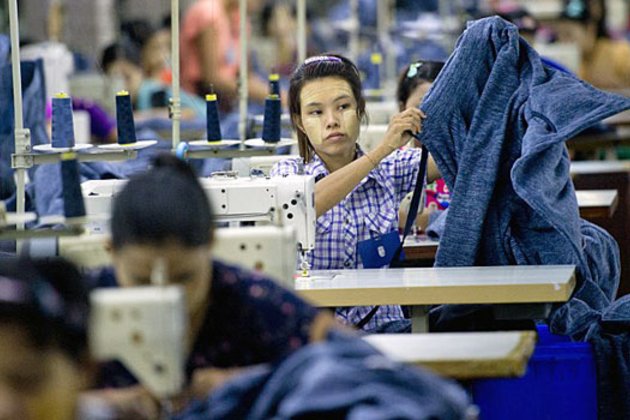 Myanmar labor organizations urged visiting European Union delegates on Monday to reconsider the possible withdrawal of trade preferences that allow the developing country tariff-free access to the bloc, under threat from Brussels in response to alleged ethnic cleansing of ethnic Rohingya during a 2017 military campaign.

The EU delegation met with representatives from the Confederation of Trade Unions in Myanmar (CTUM), the Myanmar Infrastructure, Craft and Service (MICS) organizations, and the Agriculture and Farmers Federation of Myanmar (AFFM) in the commercial hub Yangon to discuss the preferential trade arrangement.

The delegation arrived in Myanmar on Oct. 28 and began its work on the ground on Monday.

The mission's findings will help the EU determine whether to withdraw Myanmar's Everything But Arms (EBA) status, which gives the country tariff-free access to the European market for all exports except weapons and ammunition.

The EU mission comes on the heels of a blog post earlier this month by Cecilia Malmström, European Commissioner for Trade, in which she indicated that Myanmar's EBA arrangement was in jeopardy over human rights violations against the Rohingya, as cited in a United Nations fact-finding mission's report in September.

The report, which describes indiscriminate killings, widespread rape, attacks on children, and village torchings by the Myanmar military during the 2017 crackdown in northern Rakhine state, calls for the prosecution of top military brass for genocide and crimes against humanity.

"The country's leadership has repeatedly disregarded calls from the EU and the international community to put a stop to this," Malmström wrote.

Myanmar labor groups appealed to the mission not to withdrawal the EBA arrangement.

"We told them we don't agree with the EU's [possible] withdrawal of trade preferences," said Maung Maung, president of the Myanmar Confederation of Trade Unions. "It would reflect badly on Myanmar workers and would be a minus sign for development work in Myanmar."

Naw Aung Aung, vice president of MICS, said that if the EU withdraws trade preferences from Myanmar, its support for the country's democratic reform will be "fruitless."

"That's why we urged the EU delegations to reconsider it," he said.

Hla Maung Shwe, vice president of the Union of Myanmar Federation of Chambers of Commerce and Industry (UMFCCI), a national NGO representing and safeguarding the interests of Myanmar's private business sector, noted that the EU doesn't tax Myanmar garment products under the current system of trade preferences.

Foreign companies, including European firms, have invested heavily in Myanmar's garment industry, accounting for 75 percent of the sector's investment, he said.

The EU is also Myanmar's largest trade partner for garments, accounting for 47 percent of exports in 2017, according to the Myanmar Garment Manufacturers Association (MGMA).

"If the EU withdraws trade preferences, it will be difficult to keep those companies investing in our country," he said. "We have about 500 UNFCCI member factories, and more than 500,000 garment factory workers in Myanmar."

Tun Tun, a central executive committee member of the MGMA, said that the withdrawal of trade preferences would force factories to shut down and workers to lose their jobs.

"The EU might expect workers to ask the government for something or to protest against it after they lose their jobs, but it is impossible," he said. "We can't do this to the government."

"If foreign countries still want to buy our products after the EU withdraws trade preferences, the products' prices will increase a bit," he said. "That's it."

Earlier this year, the EU imposed sanctions on senior military officials in Myanmar deemed responsible for violations against the Rohingya during the crackdown, freezing the assets of seven Myanmar army, border guard, and police officials and banning them from traveling to member countries.

The bloc also strengthened an existing arms embargo on Myanmar, prohibiting military training and cooperation with the country's army.

Myanmar plans to repatriate some of the 720,000 Rohingya who fled to Bangladesh during the brutal campaign, though the program has yet to get fully underway nearly a year after the two countries signed an agreement to return the refugees.

"I saw they had some bags with them, and some were crying and holding onto others," said a Muslim who declined to give his name. "I asked them why some people were crying, and a man told me that they were going to Malaysia, so they were crying because they had to leave their family members and relatives here."

Some of those who live in the camps have illegally departed for Thailand and Malaysia since 2012 with help from human traffickers.

Local Rohingya told RFA that several camp leaders and security guards are involved in the trafficking, and that some young Muslims are trying to stop them. One said that he will present relevant documents to government officials to seek their help.

"Human traffickers had disappeared for a while, but they have come back in recent years," said a Rohingya man who lives in one of the IDP camps. "We heard they went to Thaechaung and Ohndaw Gyi villages and asked people to pay 700,000-1 million kyats (U.S. $440-$628) each to send them to Thailand or Malaysia."

"We heard that three boats would leave for Malaysia from Thaechaung village last night," he said. "We have warned people as much as possible not to go."

Kyaw Hla Aung, a Rohingya community leader who lives in Thetkepyin village, said that Muslims want to go someplace where they can live and move freely.

"So they have secretly left the country," he said. "We only found out about it after they left."

Rakhine State Police Chief Kyi Lin said border guards have been stationed along the coast to try to prevent people from leaving by boat.

"We don't have anyone who left from this [Sittwe] township, but some people were arrested in Ann and Taungup townships while they were trying to flee to foreign countries," he said.

Farad, a member of the Arakan Rohingya Council in Malaysia who goes by only one name, told RFA's Myanmar Service that Malaysian government authorities detain Muslims from Myanmar who arrive there by boat, especially in large groups, and that representatives from his group are not allowed to meet with them.

Myanmar is in the process of closing down IDP camps in Sittwe and in Kyauktaw and Myebon townships, where mostly Rohingya were housed following waves of clashes in the ethnically and religiously divided state in 2012 that left more than 200 people dead and displaced about 140,000 Muslims.

More than 94,000 Rohingya, who are considered illegal immigrants from Bangladesh and whose movements are severely restricted, live in the dozen IDP camps that remain in Sittwe township.

In recent years, Rohingya who have fled by boat to Thailand and Malaysia have faced exploitative conditions where traffickers often deprive them of food and water on outward journeys and subject them to slave-like work environments.

That's still the case with those who continue to trickle out of Myanmar to neighboring countries, according to a report issued on Oct. 24 by Southeast Asia-based Fortify Rights. The report was based primarily on 16 interviews conducted in February and May with Rohingya refugees in Thailand and Malaysia who recently fled.

Both Thailand and Malaysia have "push-back policies" for refugees who arrive by boat that don't ensure protection for possible survivors of human trafficking, Fortify Rights said, adding that authorities in Malaysia frequently arrest Rohingya refugees and indefinitely detain them in IDP camps.

"Rohingya are undertaking risky journeys in search of safety and security after facing persecution in Myanmar, and traffickers are easily preying on their desperation," said Amy Smith, executive director of Fortify Rights in a statement.

"Regional governments can prevent human trafficking by providing refugees with the protection they legally deserve," she said.

Reported by Kyaw Thu for RFA's Myanmar Service and by Kyaw Htun Naing. Translated by Khet Mar. Written in English by Roseanne Gerin.